What we're fundraising for 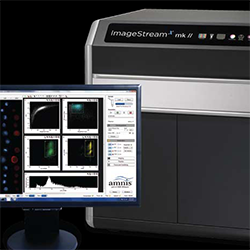 Dalhousie Medical Research Foundation’s 2018-19 Molly Appeal will provide matching funds to allow Dalhousie Medical School to acquire a very important new piece of equipment that will be used by researchers in dozens of labs at Dalhousie Medical School. The equipment is the ImageStreamX Mark II, a state-of-the-art hybrid instrument that combines microscopic visualization of individual cells with the ability to analyze five thousand cells per second by flow cytometry (high-speed cell sorting).

Conventional cell-analysis equipment only allows researchers to look at cells as groups, to see what is happening in populations of cells “on average.” The ImageStreamX Mark II will allow the researchers to isolate individual cells that exhibit unusual behaviours. These rare cells may be the keys that unlock the secrets of many diseases and lead the way to new cures.

The ImageStreamX Mark II will be a powerful discovery tool. It will allow Dalhousie medical researchers not only to better understand cellular and microbial processes in health and disease, but also to identify targets for new therapies and monitor the effects of experimental and existing drugs on a wide range of diseases.

Meet some of the patients you'll be helping

Donate to the Molly Appeal

Dalhousie Medical School's researchers are passionate in their pursuit of answers. New Faces of Molly, they are making critical discoveries that are bringing us closer than ever to lasting cures for a wide range of devastating diseases and conditions. In so doing, they are truly taking Molly’s mission into the 21st century.