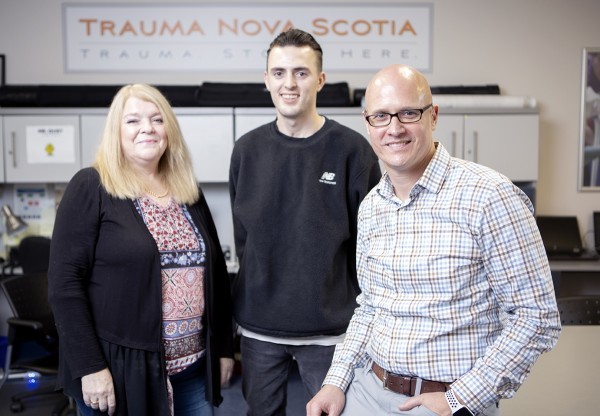 Earlier that morning, Curtis had slid off a slippery Highway 102 near his home in Shubenacadie and crashed the family car into the ditch. Thanks to another driver, who saw the crash and called 911, the EHS LifeFlight team got to Curtis in time to resuscitate him—but only because a heroic nurse refused to give up on him and performed CPR for 28 minutes. Even so, Curtis was technically dead when Lindsay Richards stopped compressing his chest. In a last-ditch effort to save his life, she inserted needles into his heart and lungs to drain any trapped air or blood. It was enough. His heart starting beating again and the paramedics rushed him to the Halifax Infirmary.

When Wendy arrived at the hospital, she made straight for the critical care unit. Here she learned Curtis was alive but so badly injured—with a bruised brain, damaged liver, destroyed spleen, shredded lungs and torn heart—hospital staff did not believe he would survive. “No one survives this kind of injury,” she was told. So she braced herself, called her other sons, and waited out the remainder of the eight-hour operation to stitch Curtis back together. Curtis survived that first night, but only barely. He remained in a coma for another month and a half, while the doctors and nurses struggled to keep him alive.

“I stayed at the hospital the whole time… slept in the family room, slept on a sofa… I didn’t want him to be there on his own, especially if he was going to die,” recalls Wendy of the dark days of waiting for Curtis to wake up. “As time went on, I just kept thinking, ‘He can’t die now, not after all he’s been through.’ I just knew I could never have to say I had lost one of my sons.”

Wendy, Curtis’ father, Allan, and his four brothers—Joel, Harrison, Mitchell and Ethan—waited on tenterhooks while Curtis remained on life support, in a coma. Every time medical staff tried to wake him up, his heart rate would skyrocket, his blood pressure would plummet, and he couldn’t breathe, so they kept him sedated. Despite this, the ICU team kept moving his arms and legs, trying to keep his body strong enough to get better. Finally, on Day 45, after much discussion with the family, Curtis was able to have his medications reduced.

“We didn’t know what to expect, because of his head injury, if he would even be himself,” says Wendy. “As a family, we had pretty much come to terms with the fact we’d be looking after him for the rest of his life, if he lived.”

Remarkably, when Curtis partially woke up and Wendy started asking him questions, he nodded his head in response, unable to speak only due to the ventilator he still needed to breathe. He knew who she was and he knew who he was. Soon afterwards, hospital staff had him up on his feet and moving around. All that work the team had done kept Curtis strong enough to rise.

Even though Curtis was back in the land of the living, his recovery was not a straight line to discharge. One day, while rolling a ball back and forth with a nurse, as his father watched nearby, Curtis’ heart stopped. Once again, hospital staff resuscitated him and, this time, fitted him with a defibrillator. With yet another new lease on life, Curtis worked hard on his recovery until he was ready to leave the hospital, three months after the crash. Now, one year later, he is working part-time while waiting to hear if he’s been accepted into trade school to be an electrician or carpenter.

“For him to overcome the enormity of the trauma and come out the other end as the same person is a miracle,” says his mother. “He doesn’t remember anything about the day of the accident, but his personality has not changed, he still has lots of energy, and he’s regaining his physical strength.”

Wendy feels Curtis was able to survive and recover because of his youth and high degree of physical fitness gained by working as a landscaper.

“Curtis certainly beat the odds… according to our 20 years of data, chances of surviving cardiac arrest from a severe trauma are less than one per cent if a person is not already in the hospital at the time,” says Dr. Rob Green. He is the Dalhousie Medical School trauma and critical care specialist who admitted Curtis to the Halifax Infirmary on the day of the crash and supervised his care throughout his stay. “We just kept doing everything we could for Curtis, no matter how slim his chances seemed.”

Fortunately, the outcome for Curtis was positive. Another person in similar circumstances may not fare so well—but there is no real way to know. In a worst-case scenario, a person would survive, but in a tragically reduced state.

“We need better tools for predicting how patients with severe trauma will do, so we can let families know what to expect and work with them to make life changing decisions,” says Dr. Green.

Dr. Green is launching a collaborative cross-country research program to develop accurate, objective ways of predicting how different people will respond to various injuries and treatments, with what likely outcomes. This work will rely heavily on the Orbitrap Fusion, sophisticated new mass spectrometry equipment to be purchased through Dalhousie Medical Research Foundation’s 2019 fall Molly Appeal.

For Dr. Green, it’s about pushing the boundaries of what can be achieved. “Who’s to say when you should give up?,” he asks. “What if Lindsay had given up on Curtis after doing CPR for 25 minutes, instead of pushing through to 28? We may think we know the limits, but we don’t.”