Learn more about how you can support this leading-edge work through DMRF's Spring 2018 Molly Appeal Campaign!

(Excerpts of this story taken from the “Celebration” The DMRF Impact Report to Donors, 2017)

While the journey of a thousand miles may begin with a single step, there is no easy way to assess just how long that journey will take, nor where it will take you; Dr. Sultan Darvesh’s research is a testament to this.  For over twenty years, Dr. Darvesh has been passionately seeking to find a cure for Alzheimer’s disease and his single step began with a commitment to finding a tool in which to diagnose Alzheimer’s in a living patient.  At present, doctors can’t be one hundred percent sure a patient has actual Alzhiemer’s disease, as opposed to another type of dementia, until an autopsy is performed on the patient’s brain after death.  Without an accurate diagnosis, it is difficult to create a precise and effective treatment plan for individuals demonstrating characteristics of the disease and, most importantly, ineffective diagnosis makes it almost impossible for scientists and clinicians to develop a cure.  Dr. Darvesh is determined to change that.

As a medicinal chemist, cognitive neurologist, and professor at Dalhousie University, Dr. Darvesh is a leader in the global efforts to develop a definitive test for Alzheimer’s disease during life. A Dalhousie Medical School alumni from the mid-80s, Dr. Darvesh’s awards and accolades have been many; in 1985 he earned the W. Alan Curry Studentship from Dalhousie Medical Research Foundation, a significant award created to support medical student basic science research.  Flash forward thirty plus years and Dr. Darvesh now holds the prestigious title of DMRF Irene Macdonald Sobey Chair in Curative Approaches to Alzheimer’s Disease.

But what does this mean to you to the average person?

For starters, Dr. Darvesh very recently made a crucial breakthrough discovery that could see us making accurate diagnosis of Alzheimer’s disease in a living patient, which would enable us to develop better treatments and ultimately a cure - that means everything to the millions of people, across the globe, who are living with this devastating disease.  While the accumulation and improper metabolism of amyloid plaques in the brain is thought to be an indicator of Alzheimer's disease, in late 2015 Dr. Darvesh, after testing more than 400 compounds, make a significant discovery – he determined that the presence and prevalence of an enzyme called butyrylcholinesterase (BChE) in plaques in the brain was an even more significant predictor of Alzheimer’s disease.  He has since focused the efforts of his laboratory to detecting BChE associated with beta-amyloid plaques. 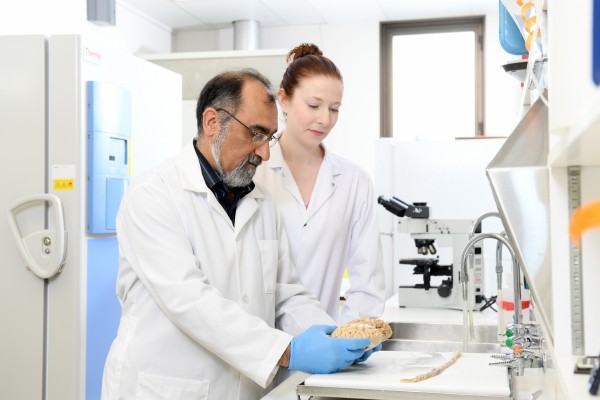 “After intravenously injecting our lead compound into a living Alzheimer mouse model, we could see clearly through diagnostic imaging that this compound was binding with BChE that accumulates in plaques uniquely within brains affected by Alzheimer’s” says Dr. Darvesh. “This has never been done before and holds promise for early detection and novel curative approaches for Alzheimer’s disease.”

DMRF donors have played a crucial role in this breakthrough work as private dollars have help sustain the continuity of Dr. Darvesh’s research, while allowing him to build a team of experts, and acquire essential equipment.  Whether it’s the Sobey family’s generous endowment gift to support a Chair position, Sadie MacLeod’s gifts of shares to purchase vital equipment, monthly donations to the Maritime Brain Tissue Bank, or Molly appeal gifts to support our neurology campaign, Dr. Darvesh are grateful for this consistent funding.

“The continued interest and financial contributions from all of our donors has had a significant impact in our work towards understanding Alzheimer’s disease,” says Dr. Darvesh.  “The research process is a journey with many peaks and valleys.  Your generosity has helped us to move towards better detection of this disease during life.  This has been a significant advance in our research program so far, and will facilitate the development of curative approaches to Alzheimer’s disease.”